You are here: Home / About

I am an associate dean at Faulkner University Thomas Goode Jones School of Law and executive director of the Blackstone & Burke Center for Law & Liberty. My books include Literature and Liberty: Essays in Libertarian Literary Criticism (2014), Oliver Wendell Holmes Jr., Pragmatism, and the Jurisprudence of Agon: Aesthetic Dissent and the Common Law (2017), Of Bees and Boys: Lines from a Southern Lawyer (2017), The Southern Philosopher: Collected Essays of John William Corrington (2017), Writers on Writing: Conversations with Allen Mendenhall (2019), and The Three Ps of Liberty: Pragmatism, Pluralism, and Polycentricity (2020).

I edit Southern Literary Review and have been a visiting scholar at the American Institute for Economic Research, an adjunct legal associate at the Cato Institute, a Mises Emerging Scholar with the Ludwig von Mises Institute Canada, an associate of the Abbeville Institute, a Humane Studies Fellow with the Institute for Humane Studies, a staff attorney for Chief Justice Roy S. Moore of the Supreme Court of Alabama, and an assistant attorney general in the State of Alabama Office of Attorney General Luther Strange.  I am an elected member and trustee of the Philadelphia Society, an associated scholar at the Ludwig von Mises Institute, a policy adviser for the Heartland Institute, president of the Alabama Association of Scholars, and president of the Montgomery Lawyers Chapter of the Federalist Society.

I have taught in university English departments, a humanities department, a law school, a business school, a Japanese private school, and a penitentiary, and have served on the board of directors or editorial board of several organizations and publications. While in private practice in Atlanta, I represented non-profit corporations and litigated cases involving real property, contracts, collections, foreclosures, restrictive covenants, and real-estate transactions. I am a graduate of Leadership Lee County (Alabama), the Alabama State Bar Leadership Forum (Class 14), and the Atlas Leadership Academy of Atlas Network. 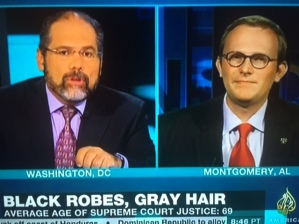 I have authored hundreds of publications.

My writing for popular media has appeared in Newsweek, The Wall Street Journal, The Washington Times, The American Spectator, Pacific Standard, The Hill, The Los Angeles Review of Books, The American Conservative, The Daily Caller, The Federalist, The Freeman, Liberty, The University Bookman, Chronicles, The Christian Lawyer, The Conversation, and elsewhere. I have spoken or delivered papers at Harvard University, Brown University, Georgetown University Law Center, George Mason University, University of British Columbia, University of Nevada-Las Vegas, Auburn University, West Virginia University, the Alabama State Capitol, and other universities and locations.

Mendenhall has focused our attention on the serious misconception that lawyers can teach writing skills. No doubt many a young associate can testify to a supervisor’s writing or editorial ineptness. It doesn’t bear much repeating that most lawyers are not inclined to treat the English language with kindness. And even good writers may not have the time or temperament to teach others how to write. (It’s easier to rewrite the darn thing themselves.) … Mendenhall is on to something. The legal profession could make much better use of those who teach writing for a living and those who would like to

Allen Mendenhall offers a compelling analysis of the Dred Scott decision, positing Chief Justice Roger B. Taney’s initial opinion as a deathblow to Scott’s humanity that released a haint, which would haunt all future references to the case. It is appropriate, then, that Mendenhall cites Toni Morrison’s Beloved, a novel that imagines the return of history through the body of a child dealt a deathblow by her mother’s own hand. Consistent with Mendenhall’s interest in recorporealization, the baby that Sethe kills returns to the present in bodily form and this has various interpretations.

[B]ehind the stories we love to tell are the more insistent stories that are the real driving forces of a nation that was structured around the system of slavery. These are stories that resist a neat outline or a clean telling, and more often than not they are stories marked by a revealing incoherence. Allen Mendenhall explores one of the most important examples of those subterranean tales, a Supreme Court case that led to a devastatingly simple conclusion—the denial of African American rights to citizenship—but a conclusion that follows from an incoherent mess of conflicting and partial stories, more than 500 books that together add up to a haunting presence in American legal, political, and cultural history. … Mendenhall does important work in uncovering the history surrounding and obscuring the Dred Scott decision. He reminds us that legal decisions are often the product of complex, competing, and sometimes nearly incomprehensible stories, and he demonstrates that we can learn a great deal about U.S. racial history by studying the stories told to bolster legal decisions informed by prejudice. The twisted and competing tales he discovers behind the scenes and in the aftermath of Dred Scott are revealing, but they would not be terribly surprising to African Americans of the time, who understood well both the foreground and the implications of the decision.